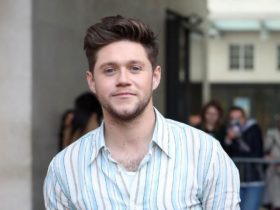 Previously, the rapper has released his two-track, “Gooba” and “Trollz,” and this track ‘Yaya‘ was filmed and recorded in non-social-distanced lockdown, features lots of booty and bright colors, and, for whatever reason, milk.

In this track, Tekashi sung in Spanish, “Una nena asi me hacia falta/Que metiera mi mano por su falda/Se ve que no es santa/Es como yo que le gusta la maldad,” he raps, which translates in English to, “I needed a girl like that/ To put my hand in her skirt/ It’s obviousl that she’s no saint/ Like me, she’s got a taste for evil.”

The three songs the rapper has released since his release are remarkably different from each other musically, between the hard-hitting “Gooba” and the comparatively loose groove of “Trollz,” ft. Nicki Minaj.

6ix9ine shared the news that another track was on the way on Instagram with caption, “NEW MUSIC VIDEO THIS FRIDAY JULY 3RD.” In the video, he spoke about his plans for his final days of house arrest and beyond.