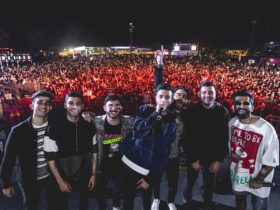 Earlier this year he released the original single. Earlier this week, The Weeknd teased a collaboration with the Spanish pop star, ROSALÍA sharing an uncaptioned photo of the pair together on social media. The new remix music arrives alongside a lyric video comprised of footage from the identical photoshoot.

“At first I felt like I went overboard with ambition,” The Weeknd told Variety earlier this year. “I’m ambitious, but I thought maybe it was too much. But it wasn’t until people liked ‘Blinding Lights” that I was like, ‘This is so not what now is, and people loved it anyway.’”

Recently, Maluma & The Weeknd has dropped a new remix of their Papi Juancho track “Hawái.” Meanwhile, On 28th Aug, The Canadian pop singer teamed up with Calvin Harris for the brand new EDM track named ‘Over Now.’ Also, he collaborated with the late Juice WRLD for the brand new pop, hip hop track named ‘Smile.’ This year, he also released his new album called ‘After Hours’.

MUST READ – METALLICA Collaborates With Monopoly For ‘World Tour’