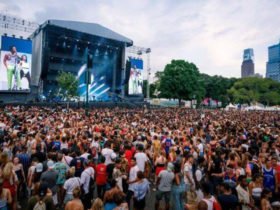 Made In America Festival Canceled Due To COVID-19

Canadian singer & songwriter, The Weeknd’s super hit single, ‘Blinding Lights’ has become the first single to spend one year in the top 10 of the US Hot 100 singles chart.

In Nov 2019, he officially released the track from his latest album, ‘After Hours,’ which was released in March 2020. Meanwhile, It went to number one in the US on April 4 last year and has so far spent a total of 64 weeks in the Hot 100.

MUST READ – Cardi B Teases New Music & Album On Twitter

The track has crossed 454 M+ views on YouTube now. In the latest Hot 100 chart (dated March 13) that is set to be published later today (March 9), ‘Blinding Lights’ will remain in the top 10 for the 52nd consecutive week – ensuring that it is the first song ever in the Hot 100’s history (which dates back to August 1958) to spend a year in the top 10.

The Hot 100 blends all-genre US streaming (official audio and official video), radio airplay, and sales data to compile its chart. You can find the latest chart when it goes live here, and listen to ‘Blinding Lights’ below.