Drake Honored Artist of the Decade At BMAs 2021

American guitarist, Tom Morello has accidentally tackled by security during the Rage Against The Machine show in Toronto. Watch the concert video clip below.

On July 23(last night) it happened after a crowd member stormed the stage. One of his fan-shot footage shows, one fan managed to make it up on stage via a set of steps during the closing track ‘Killing In The Name’. A security guard was quick to respond and ran towards the man in an attempt to remove him.

The stage-crasher, however, fell into the pit as Morello was accidentally taken down by the security guard. “Hold up! Hold up!” Zack de la Rocha repeatedly said down the mic, bringing the performance to a halt.

Morello eventually managed to get himself back up on the stage, and was met with cheers and applause from the crowd. “Don’t try that shit,” de la Rocha announced. “We’re cool, we love y’all… but don’t do that.”

Rage Against The Machine then restarted ‘Killing In The Name’ from the top. You can check out the footage below. 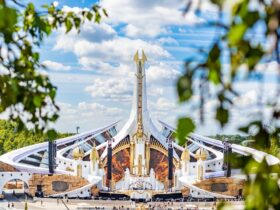