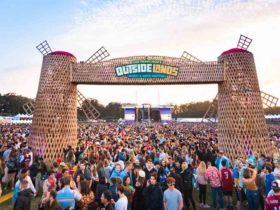 Tame Impala, The Strokes And More To Headline Outside Lands Music Festival On 2021

American rapper, singer, Travis Scott has announced that his new single named ‘The Plan‘ will be out this week(Aug. 21). Check out the post below.

Scott shared the cover art of the track via Twitter and wrote that “FLAME x CHRIS NOLAN COOK UP THE PLAN FRIDAY.” The brand new track will feature on the soundtrack for Christopher Nolan’s upcoming action film Tenet.

This year, Travis Scott has released songs with Kanye West (“Wash Us in the Blood”), Rosalía (“TKN”), Kid Cudi (“THE SCOTTS”), and more yet. The new track, “The Plan” repped Scott’s first foray in writing film music, collaborating with Oscar-winning composer Ludwig Göransson.

“The way that he connects with art is not in a singular form.” Göransson said about Scott, “He has so many tentacles, and they’re all-electric. So when we talk about feeling, [whether that’s] listening to a song or talking about a movie, he can visualize things in so many different fields. So it’s a very special ability. It’s like his own magic power.”

Tenet will launch in Canada on Thursday, Aug. 27, and within the U.S. Thursday, Sept. 3. It was introduced today that choose U.S. cities can have preview screenings of the Nolan film on Aug. 31, Sept. 1 and Sept. 2.

You can watch the trailer and also listen the snippet of “The Plan” here.

Recently, one of the insiders has revealed that Ariana Grande will be the next collaborator partner of Travis Scott’s new single ‘Called My Mind‘. It will be an amazing team-up if it is true. One of the Grande’s fan page grand bae shared collaboration news on Instagram.