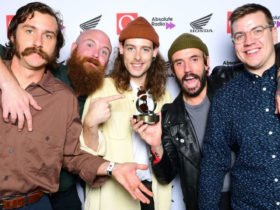 IDLES Teases New Song ‘A Hymn’ Out This Month

Yeasayer has voluntarily dismissed their lawsuit against the Weeknd, producer Frank Dukes, and UMG Recordings, Inc. over the Black Panther single “Pray for Me.” According to documents—filed in a New York federal court and viewed by Pitchfork — Yeasayer “confirmed to their satisfaction that no copyright infringement occurred.”

Yeasayer and their We Are Free, LLC had filed the lawsuit against the Weeknd, Kendrick Lamar, producers Doc McKinney and Frank Dukes, and labels UMG, Interscope, Aftermath, and Top Dawg Entertainment in February 2020. In the suit, the Brooklyn band claimed that “Pray for Me” features a “distinctive choral performance” from “Sunrise”—“male voices singing in their highest registers, with animated, pulsing vibrato.”

Yeasayer Dismiss Their Lawsuit Against The Weeknd

This past spring, the Weeknd, Frank Dukes, and UMG responded to the lawsuit, denying all allegations of copyright infringement. Kendrick Lamar, Doc McKinney, Interscope, Aftermath, and Top Dawg did not respond to the lawsuit and are not mentioned in the text of the dismissal.

Pitchfork has reached out to lawyers and representatives for Yeasayer, the Weeknd, and Kendrick Lamar for comment and more information.

READ MORE – Kane Brown, Swae Lee And Khalid Join Forces For New Song “Be Like That”