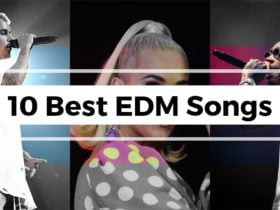 Top 10 Most Viewed EDM Songs In The World

Sufi music gives the Sufism melodic vibe with love and soul great peace and pleasure. When you sing, you surrender yourself to God. This has a calming effect. Sufi music also spreads the message of peace and love. Everything in Sufism is towards peace, love, purity, and inner peace. listening to Sufi songs in any language is just amazing.

When people feel sad or kind of emotional Sufi music always helps because Sufi songs are so soothing because of the type of rhythm and vocals used, this relaxes the mind and gives an experience of immense joy. Sufism, the mystical sect of Islam, is partly characterized by its rich musical tradition, primarily based on the writings of Sufi poets such as Rumi, Amir Khusrau, and Bulleh Shah.

Sufi songs are poems of the Sufi Saints which have been revered and sung by legendary singers across borders. For the Sufi vocalists in India and Pakistan, Sufi songs are apparently the food for their souls. Although public performances of Sufi music are now rare we can still see the genre in the not-its-purest form in Hindi films, live performances, and the famous music show Coke Studio.

If you are not a fan of sufi or slow rhythmic with deep meaning of lyrics so don’t worry you definitely love this series i am sure. so let’s started. But before i started i have to tell you that this is not a ranking of sufi music this is not top 10, i am giving you the best 10 music in not any order. let’s start.

Experience the emotions of the wildly popular classic, #PiyaGharAaya, as Fareed Ayaz explains the divine notion of this Sufi kalaam accompanied with the powerful vocals of Abu Muhammad Qawwal and Brothers. #CokeStudio11

Abida Parveen is a Pakistani Sufi Muslim singer, composer, and musician and she has been dubbed as the ‘Queen of Sufi songs’. Rahat Fateh Ali Khan, is a Pakistani musician, primarily of Qawwali, a devotional music of the Muslim Sufis. Both had a soothing collaboration for this biggest hit of Composer Amir Khusrow.

Watch this unforgettable performance by The Wadali Brothers at the 5th Jashn-eRekhta 2018. The inauguration of Jashn-e-Rekhta was followed by a terrific musical performance featuring the inimitable Wadalis – Puran Chand Wadali and his son Lakhwinder Singh Wadali, which left the cheering audience asking for more. They sang one of their most famous qawwalis “Tu mane ya na mane dildara asan te tenu rab maniya”.

Must Listen Live at Jashn-e-Rekhta

Another masterpiece by A.R. Rahman was one of the best songs of the year it was released in. The struggle of superstar singer Jordan in the film ‘Rockstar’ was so nicely portrayed through this song that anyone could relate to it personally.

Rockstar whole album is super fantastic but one track that simply class apart is “Kun Faaya Kun”. In this movie Ranbir Kapoor has shed his boy next door image and we believe this is his best work done so far. This song is sung by Mohit Chauhan, Javed Ali, A R Rahman whereas lyrics are penned down by Irshaad Kamil who has also given lyrics in hindi movie Mausam.

Enjoy listening to this super hit romantic sad song Ye Jo Halka Halka sung by Nusrat Fateh Ali Khan in his melodious vocie and have a great musical time. Nusrat Fateh Ali Khan is known as primarily a singer of Qawwali, the devotional music of the Sufis. He is popularly known as Shahenshah-e-Qawwali. Today his nephew Rahat Fateh Ali Khan ais also a famous singer. Nusrat, considered to be one of the most important qawwals in history, received the President of Pakistan’s Award for Pride of Performance for his contribution to Pakistani music.

Halka Suroor is an intoxication, a heady feeling of passionate love for the beloved. And Nusratji’s rendition of this song takes it to a higher level than just the physical.

Sanson Ki Maala Pe is a superhit song sung by Nusrat Fateh Ali Khan. The legendary singer brings life to the song with his amazing voice and energy. Have a great time listening to this song.

A movie that by its very name evokes the charm of Old Dilli will be incomplete without tracks typical of the Jama Masjid-Nizamuddin Dargah aura. And ‘Arziyan’ is what fulfils that – with panoramic shots of Delhi, singers Javed Ali and Kailash Kher infuse the magic of Chandni Chowk into this A.R. Rahman melody.

Javed Ali’s Live Performance in the Programme Named “Aaj Ki Raat Hai Zindagi” Hosted By The Legend Amitabh Bachchan. In this video Javed Ali Singing the Song ‘Arziyan’ from the film ‘Delhi 6’. This song is also known as ‘Maula Maula’ Song of ‘Delhi 6’ Movie. Music Director of this Song is Maestro A. R. Rahman.

Dama Dam Mast Qalandar is a spiritual Sufi song written in the honor of the most revered Sufi saint of Sindh, Lal Shahbaz Qalandar of Sehwan Sharif. The original poem was initially written by the 13th-century Sufi poet Amir Khusrow, then further modified by Bulleh Shah in the 18th century.

The Nooran Sisters – Jyoti Nooran and Sultana Nooran – are a Sufi singing duo from Jalandhar, India. They perform Sham Chaurasia Gharana classical music. The sisters were trained from early childhood by their father, Ustad Gulshan Mir, grandson of Bibi Nooran and son of Swarn Nooran, a Sufi singer of the 1970s.

This Sufi song is a masterpiece which was composed for the movie Fiza (2000) and sung by A.R Rehman a devotee himself who cherishes Sufi Music. This Sufi song is the only song to be directed in the Haji Ali Dargah, Mumbai which is situated in the backdrop of a beautiful view of a mound of rocks rising above the sea giving the illusion of a floating mosque in the sea. The song reflects upon the glory of the Dargah that is evident as one never goes home disappointed and the song also resonates spirituality and serenity.

IF YOU LIKE THE ABOVE SONGS THEN STAY WITH US THIS IS PART 1 OF OUR SERIES WE COME BACK WITH PART 2 WHERE YOU GET MORE INTERESTING AND UNDERRATED REMAKES OF POPULAR SUFI OR GHAZAL SONGS.