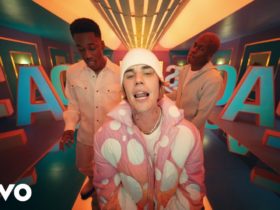 This time Amanda Cerny collabs with popular Punjabi singer or actor Gippy Gerwal and produces their new video song “Where Baby Where“. Gippy Gerwal sung this song, on the other hand we will see marvelous dance of Amanda Cerny.

Coming to the credits of the track, sung by Gippy, it has been written and composed by Jaani. Further, Sukhe Muzical Doctorz gave music to it while Baljit Singh Deo worked on the video of the song.

When we knows that Amanda Cerny is about to collabs with Punjabi singer Gippy Grewal, we got socked and excited about their new collaboration, when they will releases this song and now it is here.

Although, Gippy Grewal will be hitting the big screens next month with “Ik Sandhu Hunda Si”. Starring him and Bollywood fame Neha Sharma in the lead, the movie is one of the much anticipated Punjabi films of the year.