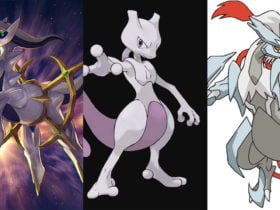 15 Most Powerful & Strongest Pokemon Ever

Here we go guys, In this horror article, I am going to present to you the best Zombie Anime you must watch If you are an anime fan.

As we all know, Zombies are mythical creatures that are virally infected human beings. They are commonly acted as cannibalistic in nature. Also, zombie films & series commonly fall into horror, action, comedy, science fiction, thriller, or romance genre.

12 Best Zombie Anime You Must Watch

1 – Highschool Of The Dead

Highschool of the Dead is famous anime Japanese manga series written by Daisuke Satō. The story follows a bunch of high school students and the school’s nurse as they deal with the worldwide disastrous event known as the “Outbreak”.

Highschool of the Dead is set in present-day Japan, starting as the world is smashed by a deadly pandemic that diverts humans into zombies, euphemistically referred to by the main characters as “Them.”

Zombie Land Saga is an anime TV series produced by MAPPA, Avex Pictures, and Cygames. The series released in Japan between October and December 2018.

In the story, A young pretender singer dies unexpectedly, awakens as a zombie, and learns her mysterious benefactor expects her to form a musical group with other zombies as part of a campaign to inspire the people of a culturally stagnant Japanese prefecture. One of the Best Zombie Anime you must watch.

3 – Kabaneri Of The Iron Fortress

Kabaneri of the Iron Fortress is one of the popular Japanese anime TV series by Wit Studio. The series was streamed on the Amazon Prime Instant Video service. A mysterious virus emerges during the Industrial Revolution that transforms infected humans into Kabane and rapidly spreads.

During the Industrial Revolution, mankind is intimidated by the hasty emergence of undead monsters called Kabane, who can only be destroyed by hitting their heart via an iron plate. One of the Best Zombie Anime you must watch.

School-Live! is a Japanese manga series written by Nitroplus’ Norimitsu Kaihō. As Yuki(a cheerful school girl) aims out fun school activities every day while living at school, the other girls work to maintain her safe, because in reality, they are the only survivors of their school after a zombie outbreak overruns the city.

The series chronicles the efforts of the spooky and private Hellsing Organization as it combats vampires, ghouls, and other supernatural foes who threaten England.

Hellsing, a British-sponsored secret organization, is in charge of keeping a check on all vampire activities and protecting the people. It is armed with secret weapons and also has an army.

The manga serialized in Kodansha’s Bessatsu Shōnen Magazine between December 2009 and September 2014 and compiled in eleven tankōbon volumes. One of the Best Zombie Anime you must watch.

In the series, Ayumu Aikawa is a zombie who was once an ordinary high schooler resurrected by a necromancer named Eucliwood Hellscythe after being murdered by a serial killer. As he tries to make the best of his undead life, he encounters a Masō-Shōjo named Haruna and inadvertently takes her magic powers, being forced to become a Masō-Shōjo in the process.

8 – The Empire Of Corpses

The movie is part of a series of films based on novels written by Project Itoh. It was followed by Harmony and Genocidal Organ. In 19th-century London, corpses are resurrected to be used for manual labor. After being invited to join a secret society, a young medical student is given a mission to find the lost writings of Dr. Victor Frankenstein. One of the Best Zombie Anime you must watch.

Premiered in Monthly Shōnen Gangan on April 12, 2005. The series centers on the “Corpse Princess” Makina Hoshimura, an undead girl who is hunting down 108 undead corpses in order to gain entry into heaven with the help of a secret society of anti-corpse Buddhist monks.

The story pivots around a couple, Tadashi and Kaori, as they fight to survive against a ghostly horde of undead fish with metal legs powered by an odor known as the “death stench”. Also, The work includes a pair of bonus stories, titled The Sad Tale of the Principal Post and The Enigma of Amigara Fault.

Zombie-Loan is a famous horror anime series created by Peach-Pit: Banri Sendo and Shibuko Ebara. Michiru Kita possesses the Shinigami Eyes, a power that permits her to see a person’s closeness to death by seeing a ring around the person’s neck. When a person is marked to die, a gray ring appears, which shades over time.

A 12-episode anime TV series adapted by studio Pierrot aired on Tokyo MX between July and September 2014. Tokyo Ghoul is an alternate reality where ghouls, creatures that look like regular people but can only endure by eating human flesh, live among the human population in secrecy, hiding their true nature in order to evade pursuit from the authorities.