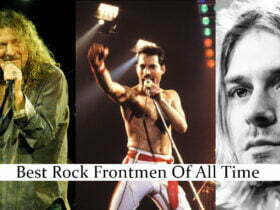 20 Best Rock Frontmen Of All Time

Here we go guys, in this article we are presenting to you Who Is The Fastest Rapper In The World? and also you’ll see the top 12 fastest rappers list. As you all know, Rapping is a musical type of rhyming vocal, which is performed or chanted in a variety of ways, usually over a backing beat or musical accompaniment.

Also, Today, the term rap is so closely associated with hip-hop music that many writers use the terms interchangeably. When you scroll up the page you will see who Is The Fastest Rapper In The World.

Eminem(real name Marshall Bruce Mathers III) is an American rapper and record producer, born on October 17, 1972. He is one of the greatest and fastest rappers of all time. He is among the best-selling music artists of all time, with estimated worldwide sales of over 220 million records.

Eminem has been influential for many artists of various genres. Also, He has won lots of awards, including 15 Grammy Awards, eight American Music Awards, 17 Billboard Music Awards, an Academy Award, and an MTV Europe Music Global Icon Award.

Twista(real name Carl Terrell Mitchell) is an American rapper, born on November 27, 1973. According to Guinness World Records, He is holding the title of fastest English rapper in the world in 1992, being able to pronounce 598 syllables in 55 seconds.

Twista signed with Big Beat and Atlantic Records, where he released his third album Adrenaline Rush, and formed the group Speedknot Mobstaz, in 1998.

Tech N9ne(real name Aaron Dontez Yates) is an American rapper and record producer, born on November 8, 1971. He sold over two million albums and has had his music featured in film, television, and video games.

His stage name originated from the TEC-9 semi-automatic handgun, a name given to him by rapper Black Walt due to his fast-rhyming chopper style.

Krayzie Bone(real name Anthony Henderson) is one of the fastest American rappers & singers, born on June 17, 1973. He is a member of the rap group Bone Thugs-n-Harmony.

Daveed Daniele Diggs is an American actor & rapper, born on January 24, 1982. He is the vocalist of the experimental hip-hop group Clipping. Also, he has been awarded a Grammy Award for Best Musical Theater Album.

In 2021, he received a nomination for a Primetime Emmy Award for Outstanding Actor in a Supporting Role in a Limited Series or Movie for his performance in the Disney+ live stage recording of Hamilton which was released in 2020.

Busta Rhymes(full name Trevor George Smith Jr.) is an American rapper, born on May 20, 1972. He has received 12 Grammy Award nominations for his work, making him one of the most nominated artists without winning.

Watsky(full name George Virden Watsky) is an American rapper & singer, born on September 15, 1986. In 2011, Watsky broke out as a rapper with his viral video “Pale kid raps fast,” which featured his trademark chopping style.

On May 7, 2020, Watsky set the Guinness World Record for the longest rapping marathon, rapping for 33 hours 33 minutes, and 19 seconds.

R.A. the Rugged Man is an American rapper and producer. He also holds the fastest rapper title. In 2013, Thorburn released his second album, Legends Never Die, via Nature Sounds.

Thorburn signed to major label Jive Records at age 18, but his debut album, Night of the Bloody Apes, was never released.

Yelawolf(full name Michael Wayne Atha) is an American rapper and songwriter, born on December 30, 1979. It was not until 2010’s Trunk Muzik EP that Yelawolf started to gain mainstream attention.

Twisted Insane(real name Michael Johnson) is an American rapper and songwriter, born on September 22, 1982. He has released eleven studio albums and holds the title of fastest rapper in the world.

Outsider(real name Shin Ok-Cheol) is a South Korean rapper, born on March 21, 1983. He is known for his speed-rapping and is able to rap slightly more than 22 syllables per second.