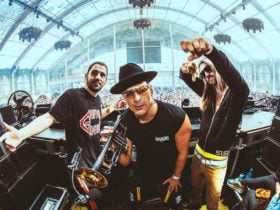 MUST-READ – DIVINE AND EMIWAY WHY THE BEEF IS SUDDENLY ENDED? (FULL STORY)

You may remember that Chief Keef never showed as much as the video shoot although it was his personal song. This time Chief Keef’s 2012 track ‘Hate Bein’ Sober’ featured along with Wiz Khalifa it appeared on the Chicago rapper’s debut album Finally Rich.

50 Cent wrote on Twitter, “@chiefkeef didn’t show up to his own video. I never saw anything like this on the first song.”

He continued, “It’s not funny @ChiefKeef didn’t sell any records yet, they will pull the plug on him. SMS AUDIO.”

He added, “I just liked him, his energy. And then, it turned into… we did “Hate Bein’ Sober.” It was me and Wiz Khalifa and Chief Keef but he never showed up to the video and me and Wiz shot the video.”