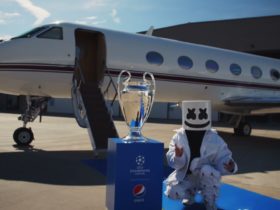 The musical artist, Ariana Grande has teamed up with Kid Cudi for the new song named “Just Look Up.” Listen to the full song below.

The track will appear on the new soundtrack to the Adam McKay–directed new film Don’t Look Up, which begins streaming on Netflix starting December 10.

Speaking about the movie, “DON’T LOOK UP,” tells the story of two low-level astronomers who must go on a giant media tour to warn mankind of an approaching comet that will destroy planet Earth. Written and Directed by Adam McKay.

In Oct, Ariana Grande teamed up with Kelly Clarkson for the massive Christmas Song named “Santa, Can’t You Hear Me.”