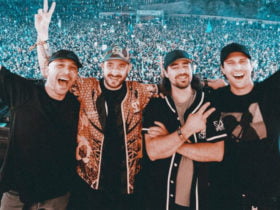 SLANDER Team Up With Ganja White Night For 1st Track Together, “Miss You”

American singers, Ariana Grande & Kid Cudi have performed their live performance of the track, ‘Just Look Up’ from the movie “Don’t Look Up.” Watch the full video below.

The movie, Don’t Look Up’ was written and director Adam McKay. It tells the story of two low-level astronomers who must go on a giant media tour to warn mankind of an approaching comet that will destroy planet Earth.

‘Don’t Look Up’ was released in theatres on December 10 & launched on Netflix on December 24. The track, ‘Just Look Up’ is a pop anthem from Grande, but features lyrics such as: “Listen to the goddamn qualified scientists/ We really fucked it up, fucked it up this time”.