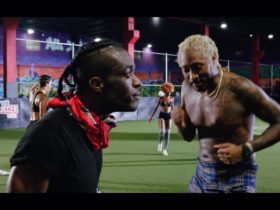 The track is about the disruptors, the game changers, the Benefits, the ones who believe in the journey more than the destination. Also, he is Introducing new singer Reet Talwar. Artists performed in the video – Badshah & Reet Talwar, Lyrics & Composed by Badshah, Music is given by Hiten, Mixing & Mastering by Hiten.

MUST READ – Ikka Finally Drops His Debut Album, ‘I’

Last week, Badshah teased the track via Instagram while tagging Reet Talwar, and the track is finally out now. Also in Aug, he officially released his brand new album, ‘The Power of Dreams of a Kid,’ The album features 8 brand new tracks including, Shuru, The Power Of Dreams(Ft. Lisa Mishra), BKL, Hot Launde (Ft. Fotty Seven, Bali) & many more. The album represents the story of his struggle.