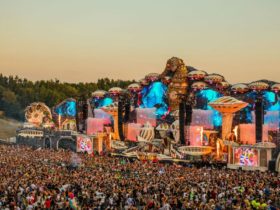 American singer & songwriter, Billie Eilish has won the record of the year award at the Grammys 2021 ceremony. Check out the post below.

“This is really embarrassing for me,” Billie said while receiving the award. “Megan, girl… I was gonna write a speech about how you deserve this but then I was like, ‘There’s no way they’re going to choose me.’ I was like, ‘It’s hers.’ You deserve this. You had a year that I think is un-stoppable. You are a queen—I want to cry thinking about how much I love you… You deserve everything in the world, I think about you constantly… You deserve it.”

Last year, she released the song called ‘Everything I Wanted’. She directed the video by itself. Although, she collaborates with her brother for the video. Eilish and her brother wrote this song about each other. It marked Eilish’s first new single since she released her debut WHEN WE ALL FALL ASLEEP, WHERE DO WE GO?. It was also nominated for Song of the Year and Best Pop Solo Performance.