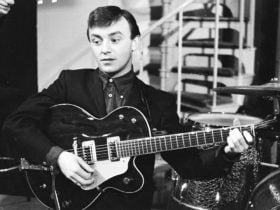 American singer and songwriter, Billie Eilish has shared the ‘Tiny Desk Home Concert‘ video, where she played her two songs “my future” and “Everything I Wanted” with brother Finneas. Watch the performance below.

The Tiny Desk is working from home for the foreseeable future. Introducing NPR Music’s Tiny Desk (home) concerts, bringing you performances from across the country and the world. It’s the same spirit, stripped-down sets, an intimate setting, just a different space.

Stephen Thompson said, “It didn’t take long for Billie Eilish to become one of the biggest pop stars in the world, sweep the Grammy Awards’ major categories, and release the latest James Bond theme. And today, at just 18, she and her brother, Finneas, have accomplished what no one has been able to do for five and a half months: perform a Tiny Desk concert in what certainly appears to be the NPR Music offices.”

“Of course, due to safety concerns,” he added, “even the NPR Music staff can’t set foot in the building that houses Bob Boilen’s desk. But if you look over Eilish’s shoulder, there’s no mistaking the signs that she’s appearing at the Tiny Desk in its present-day form: On the last day before staff began working from home, I took home the Green Bay Packers helmet that sat on the top shelf — the one Harry Styles had signed a few weeks earlier — for safekeeping. In this performance, that spot is empty.”