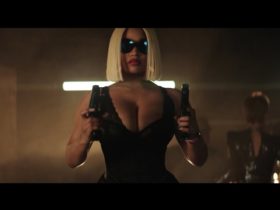 Nicki Minaj Drops New Song, ‘Do We Have A Problem?’ Ft. Lil Baby

Singer & songwriter, Billie Eilish has performed a brand new performance of her latest track, ‘Your Power‘ on The Late Show with Stephen Colbert. Watch the full video below.

Eilish acoustically performed the song while sitting on a stage in the middle of a desert, with her brother Finneas, playing an acoustic guitar.

In an interview with Colbert, Eilish said that “I had been platinum blonde for longer than we’d thought, even wearing a wig resembling her famous black-and-green do for her appearance on the show in February.

“I knew it would have these processing periods where it would look insane, and I didn’t want to look insane,” Eilish said of her hair. “But I needed something quick – so I literally ordered a Billie Eilish Halloween costume wig on Amazon. It was awful, It was the ugliest thing I’ve ever seen.”

The track is third song taken from the upcoming album, ‘Happier Than Ever,’ directed by Billie Eilish, which will be released on JULY 30TH, via Darkroom/Interscope. It followed the release of Eilish’s two 2020 singles, ‘My Future’ and ‘Therefore I Am’.

Eilish said while announced the album, “I can’t even tell you, I’ve never felt so much love for a project than I do for this one. hope you feel what I feel.” According to a press release, Eilish wrote Happier Than Ever with her brother FINNEAS, who also produced the LP.