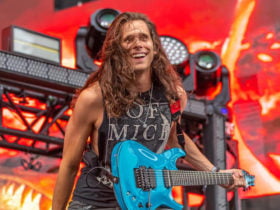 British musician & record producer, Brian Eno has released his new lyric video song named “We Let It In.” Listen to the full song below.

The track will appear on his forthcoming new solo album ‘FOREVERANDEVERNOMORE’, which is set for release on October 14 via UMC.

According to the press release, Eno explained: “My voice has changed, it’s lowered, it’s become a different personality I can sing from. I don’t want to sing like a teenager, it can be melancholic, a bit regretful. As for writing songs again – it’s more landscapes, but this time with humans in them.

“I like creating worlds, that’s what I do as an artist, creating sonic worlds. Now after quite a long absence of humans in those worlds I have tried putting one in and seeing how they feel in the world I’ve made.”

Eno has also announced details of a special talk, Space Music, that he’ll give at the Barbican in London on October 23.

“In this rare one-off talk, Eno discusses his approach to three-dimensional sound, the environment, and where we are in the world just now,” a description from the Barbican reads.

Tickets for Space Music will go on general sale at 9:45 am on Friday (September 9) from here.