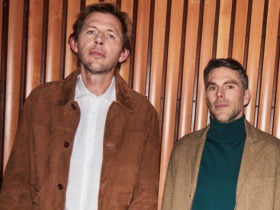 The album, Funk Wav Bounces, Vol. 2, is the followup to 2017’s Vol. 1 of the same name. Out via Sony, Funk Wav Bounces Vol. 2 is Harris’ sixth studio album, with his discography extending back to his 2007 classic I Created Disco and also including the era-defining Ready For The Weekend, 18 Months, and Motion.

“With this one, I was like, ‘I wanna have live drums and I wanna have a guitar,’” he tells Apple Music’s Zane Lowe. “I want the layers and the grit and the dirt. And I don’t want everything to be mixed perfectly. I want things to be like Sly & The Family Stone when it’s just mixed on the fly and it’s like, ‘Oh, he’s gonna do a solo now!’ And you’ve got to turn him up and he’s too loud. I just want to feel it in my chest—in a good way.”

Harris doesn’t call on these names just to gild his music; he’s interested in artists who can bring new, unexpected textures to the songs. Take Young Thug’s capricious flow, circling around Dua Lipa on “Potion”: “Like, how does he think of these things and these flows and the way that he weaves around the beat in a way that I could never, ever even imagine?” says Harris. “Being in the studio with him when he is recording and hearing the process and where he ends up is just like the brain is somewhere else. His mind is that of a genius. It’s amazing to witness it.”