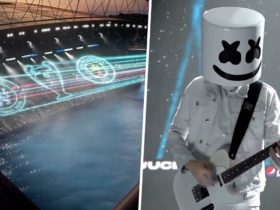 She sings, “Cause I’m really hot, dancing in stilettos on the table top/ Rodeo Drive is where I like to shop/ And I can race you there in my Bentley truck (vroom vroom).”

She also appeared in a new Rodarte fashion campaign, alongside Kathleen Hanna, Snail Mail, and the Linda Lindas. Last month, She teamed up with Tiësto for the song “Hot in It.”