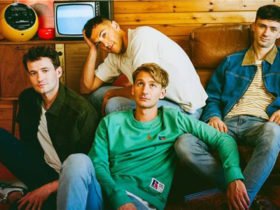 The album features 12 tracks including, That’s Hilarious, Charlie Be Quiet!, Light Switch, There’s A First Time For Everything, Smells Like Me, Left and Right, Loser, When You’re Sad I’m Sad, Marks On My Neck, Tears On My Piano, I Don’t Think That I Like Her, & No More Drama.

“Maybe a bit of a cliché statement for an artist to sit on this white couch and be like, ‘Oh, this is my most personal work,’” he told Billboard‘s, Tetris Kelly. “But it is for me because I’ve never had an entire body of work that was my personality with some melody attached to it. I mean, the album cover speaks for itself too, all of those little thoughts coming out of my head and notes.”