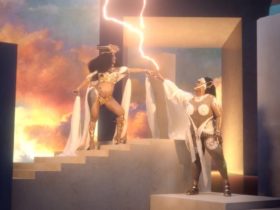 The brand new music video ‘Douha(Mali Mali)‘ taken from the new forthcoming album ‘ENERGY.’ Pre-order the full album by clicking here. On 21st May, They have released an album title track called ‘Energy.’ and the album ‘ENERGY‘ is out on August 28 via Capitol Records.

“Right now, all over the world, we’re going through an incredibly strange time.” Mahaneela said in a statement, “I wanted to make something that was visually beautiful but also felt symbolic of what we’re all going through. People feel more isolated than ever and I wanted to create something joyful that really shows the power music and movement has and the connectivity it brings.”

The music video is directed by Mahaneela and produced by Sade Lawson (Cozy Global) & Julio Mata Jr, which features dancers in various scenic locations in Italy, South Africa, and New York. The video, filmed during the COVID-19 pandemic. The duo also shared “My High,” Ft. Aminé, and Slowthai.

Chorus In English, “Mali Mali, Malians in Mali should send their blessings to those living abroad Mali Mali, we miss Mali so much!”

Disclosure is an English electronic music duo consisting of brothers Howard and Guy Lawrence. They grew up in Reigate, Surrey.