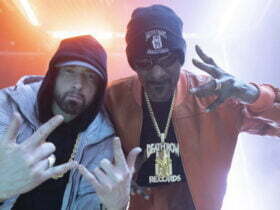 British singer & pianist, Elton John has teamed up with Britney Spears for the new track named “Hold Me Closer.” Watch the official music video below.

It’s directed by Tanu Muino, who also worked on the visuals for Harry Styles’ “As It Was,” Cardi B’s “Up,” and Lil Nas X’s “Montero.”

This stunning dance video for Hold Me Closer, shot in Mexico City by the award-winning director Tanu Muino beautifully captures an immeasurable feeling of intimacy so missing from the world through the turmoil and chaos of recent times.

Tanu said, “This was an emotional one for me as I grew up with Britney. After seeing “Slave For You,” I decided that I wanted to become a video director. Elton John is an icon that I and the world grew up listening to,”

On the creative direction, Muino continued, “Going into this video, I knew there would be a lot of emotional expectations the audience and fans would have. With this responsibility, I had to do something different and unexpected. The dance had to be forward-thinking to raise eyebrows and make Elton and Britney proud. To capture this magic, we shot around all my favorite architectural locations in Mexico City and brought on choreographer Jacob Jonas who does the best contemporary choreography today. Getting the best dancers, crew, and access to some of the most private locations in the world was simple as everyone wanted to work with Elton John and be part of his legacy.”