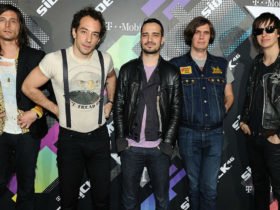 The Strokes Shares ‘Ode To The Mets’ New Music Video

American rapper and record producer, Eminem has surprisingly released his new album, ‘Music to Be Murdered By – Side B’ Deluxe Edition. Listen to the full album below.

He also released new music video of the track ‘GNAT,’ directed & edited by Cole Bennett & song produced by DA Got That Dope. He officially released his eleventh studios album, “Music To Be Murdered By” in January 2020.

The 16-track “Music to Be Murdered By – Side B” features 13 full songs with three skits. It includes a lot of covid-19 related tracks and some wordplay that is blazingly fast and dense even by Eminem standards.

In February, He surprisingly performed on the Academy Awards, after 17 years winning the Best Song Oscar for “Lose Yourself,” Eminem popped back onto the radar two weekends ago with a cameo in an SNL sketch spoofing his 2000 disturbed-superfan song “Stan.”