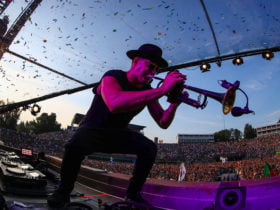 Timmy Trumpet Team Up With Harris & Ford, Cascada For “Never Let Me Go”

American rock band, Foo Fighters has unleashed a second new song, ‘No Son Of Mine’ from their upcoming album ‘Medicine at Midnight‘. Listen to the full song below.

The new album, ‘Medicine At Midnight‘ will be released on Feb. 5, 2021, Pre-save the full album by clicking here. Last month, they officially teased their brand new upcoming 10th studio album with two little video clips on their social media. In Nov 2020, they already dropped their first single, ‘Shame Shame,’

The new album is produced by Greg Kurstin and Foo Fighters, mixed by Mark “Spike” Stent, engineered by Darrell Thorp. They sing, “No son of mine will ever do / The work of villains, the will of fools / If you believe it / It must be true / No son of mine / No son of mine.”

In 2017, Foo Fighters released their last full-length record with ‘Concrete And Gold’ and they confirmed that they had finished recording its follow-up in February. Last year, the band also canceled their 2020 Van Tour due to a COVID-19 pandemic.

Foo Fighters Unleash Second New Song, ‘No Son Of Mine’ From Album ‘Medicine at Midnight‘

Foo Fighters Second single, ‘No Son Of Mine’ Out Now! Like This Track? Stream & Download The Full Song By Clicking Here.