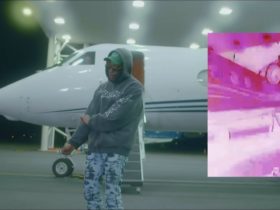 American rapper, Glorilla has performed their superhit track, “Tomorrow 2” with Cardi B at American Music Awards 2022. Watch the full music video below.

She performed her breakout single “Tomorrow 2” from this year’s Anyways, Life’s Great… EP. After beginning by rapping the song on a motorcycle, Glorilla was carried by a crowd of backup dancers and walked towards a sports car.

In September, she and Cardi B released “Tomorrow 2,” the sequel to Glorilla’s July single “Tomorrow.” Glorilla dropped Anyways, Life’s Great…, featuring the standout track “Nut Quick,” this month. Her single “F.N.F. (Let’s Go)” has also been nominated for the Best Rap Performance Grammy Award at next year’s ceremony.