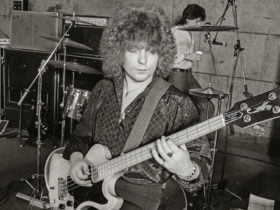 A post on his official Facebook page writes: “Our greatness passed away this morning at 9 am the house music legend we all know as PJ aka PAUL JOHNSON has passed away in this day of AUGUST 4th 2021. Rest In Heaven Paul.”

In July, Johnson shared videos on his Instagram page from the hospital, revealing that he had tested positive for COVID-19. He was 50 years old.

Johnson co-founded the Dust Traxx label with Radek Hawryszczuk in 1997, which has released music from the likes of Stacey Kidd, Glenn Underground, Gene Hunt, Roberto Armani and Peven Everett.

Johnson started DJing in the 1980s and threw parties in his mother’s basement. One day, a friend’s gun was accidentally discharged in the basement, resulting in a shooting accident that led to Johnson’s use of a wheelchair for the remainder of his life.

“This part of my life takes over 80 per cent of anything,” Johnson said, referring to his health while lying in a hospital bed, in an interview published in 2014. “I’m always smiling when I’m on the street, I’m always doing anything that anybody wants,” he said. “But when I go home, I’m hurtin’.”