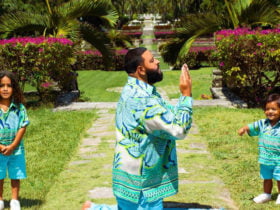 Dance music producer and DJ, Karim Naas has released his marvelous brand new remix of the track, ‘Work From Home.‘ Listen to the full track below.

The official track ‘Work From Home‘ was released in 2016 and is the first single by Fifth Harmony featuring rapper Ty Dolla $ign. It has accumulated millions of streams and won the award for Best Collaboration at the 2016 MTV Video Music Awards and the American Music Awards, winning the group their first award in this network.

Naas says, “With this remix of WORK FROM HOME, I wanted to bring something fresh to the original track by Fifth Harmony featuring Ty Dolla $ign, using urban and pop music vibes. I am proud of what KTK and I came up with.”

Naas is all set to kick off 2021 in style with his powerful remix of Fifth Harmony and Ty Dolla $ign’s worldwide hit “Work From Home”.

In 2020, Naas has accumulated more than 5 million streams. His releases received Spotify editorialists’ recognition and entered major official playlists such as Spotify’s New Music Friday Canada, New Music Now, Friday Cratediggers, and Girl On Fire. The young producer has also been critically acclaimed by the US and international media outlets.