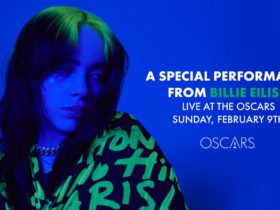 A Special Performance By Billie Eilish At Oscars Ceremony This Year

American singer, Lana Del Rey appeared to perform her latest new single “Let Me Love You Like a Woman” on The Tonight Show Starring Jimmy Fallon. Watch the full performance below.

Lana Del Rey officially released the track, “Let Me Love You Like a Woman” on 16th Oct. The track is taken from her forthcoming LP Chemtrails Over the Country Club, which will follow 2019’s acclaimed Norman Fucking Rockwell!.

Since the launch of that album, She teamed up with Ariana Grande & Miley Cyrus for her Charlie’s Angel’s music “Don’t Call Me Angel,” while sharing the covers of Joni Mitchell’s “For Free,” Bob Dylan’s “Don’t Think Twice”, Death Cab for Cutie, “I’ll Be Home for Christmas”, and more.

She sang, “We could get lost in the purple rain,” pushing her voice up to a falsetto, “Talk about the good ol’ days/We could get high on some pink champagne/Baby, let me count the ways.”

In July, She dropped the audiobook version of her new poetry collection ‘Violet Bent Backwards Over the Grass‘. The audiobook features 14 poems read by Del Rey, with music performed by her frequent collaborator Jack Antonoff. In the meantime, In August, the Weeknd shared a brand new remix of “Money Power Glory,” a tune from Lana’s 2014 album Ultraviolence.