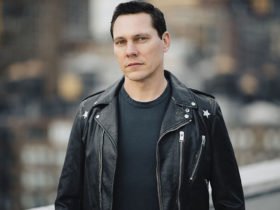 Singer & songwriter, Lorde talk about her upcoming album ‘Solar Power’, its artwork and her 2022 world tour on the latest episode of The Late Show With Stephen Colbert.

In an interview, Lorde promised she would take the shows for a live performance soon. Lorde revealed the photo on the ‘Solar Power’ artwork, which Colbert mentioned he was not allowed to show on television was taken by a friend.

“My friend just took it,” she said. “It was just me jumping over a friend on the beach. … It’s a little hardcore, but it was so joyful to me. It felt innocent and playful and a little bit feral.” Colbert replied: “If I had a butt like that, I’d be jumping over somebody too.”

Colbert also discuss about her tour and asked her if she was looking forward to being in front of audiences again. “I’m really excited, yeah,” she said. “It sort of doesn’t seem real, but I’m super keen. This album is so joyful and big and such a good thing to experience with a bunch of people, so I’m glad the timing worked out that we could do a tour.”

Yesterday, Lorde revealed her new album, “Solar Power” tracklist and releasing date. It will be released on August 20th, and shared the album’s tracklist. You can pre-order, pre-save, and pre-add the album here.