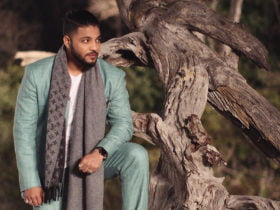 British rapper and singer, M.I.A. has dropped her new album named ‘MATA’ in Six years. Listen to the full album below.

The album features a 13-track includes a sole guest appearance from Navz-42 along with production work from the likes of Skrillex, Rex Kudo, T-Minus, Diplo, Heavy Mellow, and more.

READ MORE – Stormzy Drops Lead Single, ‘Hide & Seek,’ From New Album, “This Is What I Mean”

MATA marks her first solo full-length effort since 2016’s AIM and is described by M.I.A. as an album highlighting the clash between “ego and spirituality,” further telling Apple Music 1’s Zane Lowe, “Because as a musician, you need some ego, otherwise you can’t do it. Also, the genre of music, genres I should say, is very much egocentric. It’s not like I’m an artist that came through the gospel or something. For me, it was like to have that journey, and also, it was a significant time to discuss like Islamophobia…talking about wars in the Middle East, and things like that.”

She added that she made a return to music due to a feeling of “responsibility” when it comes to discussing issues with freedom of speech. “The album has that sort of, it has two sides to it. On the one hand, yes, I think it’s a great time to be reflective, in your own zone, and in yourself, and be away. But at the same time, you have a responsibility. I feel like sort of responsibility with music, that even if you try to go away, things happen that keep you in the loop in some way,”

M.I.A. explained. ” It’s not even, yeah, it’s not even that I intended it that way. It just happens. And I think with freedom of speech, and all of this stuff, and censorship, and all kinds of crazy things that are happening in the world today, it’s like you’re the only artist that talked about it so it kind of… It makes sense to come back and be here for it.”