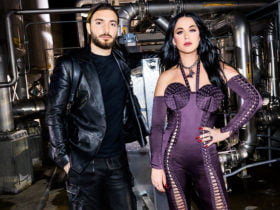 American EDM producer, Marshmello has teamed up with the singer, Demi Lovato for their brand new track ‘OK Not To Be OK.’ Watch the video below.

The track, ‘OK Not To Be OK‘ is directed by Hannah Lux Davis and produced by Aaron Johnson / Brandon Bonfiglio. Yesterday, Demi teased the track via Twitter with the caption, “OK Not To Be OK OUT SEPTEMBER 10 WITH @marshmellomusic.” The song focuses on mental health given the title and is releasing during Suicide Prevention Week.

Marshmello said to Lowe, “So she did the song and then I got it and it was just kind of piano and that’s about it, And so then I was like, how can I create an instrumental, instruments, that compliment the emotion of the song? So in the beginning it’s very slow and stuff, so I made the instrumental very slow. And then during the hook, which is the resolve of the song, I kind of picked it up with the energy and it’s kind of like a little dance tune.

He further added “I think that was a huge driving force in making the song, as well, as there was only one way the song could be. And so I spent a long time trying to find that exact moment where I was like, ‘Oh, okay, this is exactly how the song should sound. This is how it makes me feel.’ So it was just kind of like emotion turned to music in away.”

Marshmello & Demi Lovato New Track ‘OK Not To Be OK’

Marshmello & Demi Lovato – OK Not To Be OK Out Now! Like this track? Stream & Download the full track by clicking here.

Last month, Marshmello revealed that he will release a new album this year. He shared this news via twitter, and wrote “New Album This Year.” He has not revealed the title of the album yet. It is evident that this year we will get something massive by DJ Marshmello.

Meanwhile, On 28th June, he and, ‘Closer’ singer, Halsey  shared a colorful music video of their latest track ‘Be Kind.’ On 1 May, he teamed up with Halsey & released a lyric video of ‘Be Kind.’ He also collaborated with Southside, Giggs & SAINT JHN for their new track called ‘Been Thru This Before.’