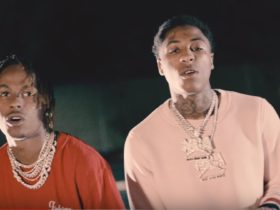 American electronic music producer, Marshmello has teamed up with Jonas Brothers for the new single, ‘Leave Before You Love Me.’

The music has a sweet heavy pop sound, with handclaps, a furrow, and the type of vibe that must break hearts around the globe. It released just days before the two acts hit the stage for the 2021 Billboard Music Awards.

MUST READ – The Chainsmokers Is Coming… [ TCS4 ]

Kevin, Joe and Nick sing, “Dancing on the edge bout to take it too far/ It’s messing with my head how I mess with your heart/ If you wake up in your bed alone in the dark/ I’m sorry gotta leave before you love me.”

Meanwhile, In 2020, the trio released the tracks ‘What a Man Gotta Do’, ‘X’ with Karol G, and ‘Five More Minutes’, plus the festive track ‘I Need You Christmas’.

Earlier this month, He announced that he launch his first NFT project, ‘Welcome to the Melloverse!.’ he teams up with Messing present for the first Defi-powered NFT drop featuring exclusive music & experiences. May be this track marks his first song from NFT.