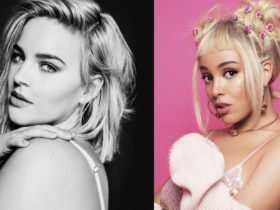 ‘Girls In The Hood’ is the Megan’s fourth single for 2020, following on from ‘Diamonds’ with Normani, ‘FREAK’ with Tyga and ‘B.I.T.C.H’. The third track featured on her third EP, ‘Suga’, which she released in March. ‘Suga’ garnered positive reviews from fans and critics, peaking at number 7 on the Billboard 200 chart.

“I’m a hot girl, I do hot shit… ” she raps on the hook. “I don’t text quick, ’cause I ain’t thirsty/These bitches mad, mad, they wanna hurt me.” She also puts her own spin on Eazy-E’s original lyrics: “‘Cause the girls in the hood are always hard/Ever since 16 I’ve been having a job/Knowing nothing in life, but I gotta get rich/You could check the throwback pics, I’ve been that bitch.”

A day before releasing, Megan has teased the teaser of this music on her Instagram, She’s seen twerking alone in a striped sundress, capturing the vibes that befit the “Hot Girl Summer” singer’s reigning season.