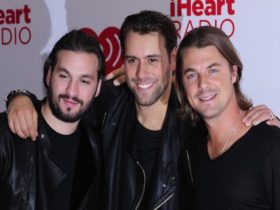 The track will appear on its upcoming new album, “This Is Why.” The track is produced by Mike Kluge, Co-Directors: Mike Kluge & Matthew DeLisi. The vocals come up, “Every second our collective heart breaks / All together every single head shakes / Shut your eyes but it won’t go away / Turn on / Turn off / The news.”

“‘The News’ is one of those songs that came together pretty quickly and felt exciting from the start,” Paramore’s Hayley Williams said in a press release. “It feels like a happy medium between classic Paramore angst and bringing in some influences we’ve always had but never exploited. Watching Zac [Farro] track drums for this one was one of my favorite memories from the studio.”

“Lyrically, it probably explains itself. The 24-hour news cycle is just impossible to comprehend. And I feel a pang of guilt when I unplug to protect my headspace. The common reaction, or non-reaction, seems to be dissociation. Not one of us is innocent of that and who could blame us?”

The album, “This Is Why” will be released on February 10, following 2017’s After Laughter and two solo albums from Williams, 2020’s Petals for Armor and 2021’s Flowers for Vases / Descansos.