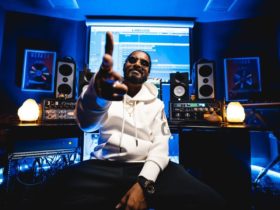 American rapper, Saweetie has teamed up with H.E.R for the new song named ‘Closer.’ Listen to the full song below.

The new track will appear on Saweetie’s forthcoming debut album Pretty Bitch Music. It was released today via Icy and Warner Records.

In verse 1 the vocals come up, “I wanna fall in love for the weekend / 3 boyfriends idk where I’m sleeping / We be thuggin, clubbin, fuckin / Order room service when we done that’s the sequence / He know ima classy nympho.”

In 2021, Saweetie released “Fast (Motion),” the Insecure soundtrack offering “Get It Girl,” and her Drakeo the Ruler collaboration “Risky.” Last year, she also released “Tap In,” “Best Friend,” and her newest single at that point, Dr. Luke–produced the song “Icy Chain.”

Meanwhile, In 2021, H.E.R. won an Oscar, won the Grammy for Song of the Year, paid tribute to Tina Turner at the Rock & Roll Hall of Fame induction ceremony, and sang at the Super Bowl.

Saweetie Team Up With H.E.R. For New Song “Closer”