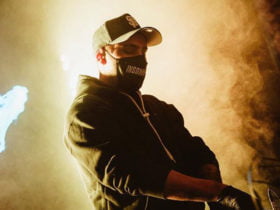 Jauz Team Up With HALIENE For New Song, ‘Oceans & Galaxies’

American rapper & songwriter, Snoop Dogg is now the owner of Death Row Records, the iconic record label where he started his career 30 years ago. Check out the full post below.

NME reports, Death Row has had a number of owners over the past two decades including toy company Hasbro, which forked out a whopping $3.8billion to buy Canadian studio Entertainment One Ltd. (eOne) in December 2019. Part of the studio’s assets included Death Row which it purchased in 2013 after the rap label’s previous parent company went bankrupt.

“I am thrilled and appreciative of the opportunity to acquire the iconic and culturally significant Death Row Records brand, which has immense untapped future value,” Snoop said in a press release.

“It feels good to have ownership of the label I was part of at the beginning of my career and as one of the founding members. This is an extremely meaningful moment for me. I would like to personally thank the teams at Blackstone, MNRK and especially David Kestnbaum, who worked collaboratively with me over several months to make this exciting homecoming a reality.”

Snoop signed off his statement by adding: “I’m looking forward to building the next chapter of Death Row Records.”