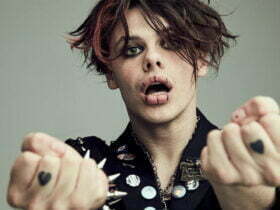 Seth and singer, Lorde spend a day drinking at Late Night With Seth Meyers, where they do things like drink Solar Power-themed cocktails, play a New Zealand slang drinking game and paint the Melodrama album cover.

She also performed her brand new single “Stoned at the Nail Salon” alongside Jack Antonoff. It marks her second single from the upcoming album, “Solar Power,” which will be released on August 20th.

In the meantime, In an interview, Lorde promised she would take the shows for a live performance soon. Lorde revealed the photo on the ‘Solar Power’ artwork, which Colbert mentioned he was not allowed to show on television was taken by a friend.