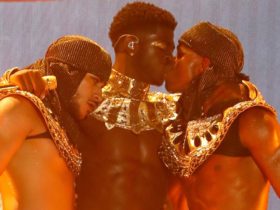 Colombian singer and songwriter, Shakira to release her new song named “Monotonia” featuring Ozuna next week. Check out the full teaser below.

The track will be released on 19th Oct[Next Week]. She shared the track news via Instagram with a brief sound clip and an image of the song title atop a heart being stabbed with a dagger.

The track “Monotonía” will be the Colombian superstar’s follow-up to “Te Felicito” with Rauw Alejandro, which topped the Billboard Latin Airplay chart and also reached No. 1 on the Billboard Argentina Hot 100 chart.

Earlier this week, Shakira confirmed her split with Spanish soccer player Gerard Piqué a few months ago, and said recently that she was going through “the most difficult, darkest hours of my life”

Shakira To Release New Song, ‘Monotonia’ With Ozuna Next Week