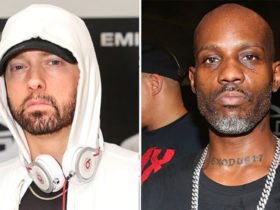 He shared a 30-minute documentary titled Last Week, which was filled with candid scenes from West’s business and personal life. In the intro, a Kanye West–style character analyzes a Japanese criminal underworld while riffing on video-game tropes. Then the film diverts into a reality format, with West hearing pitches, securing business deals, and driving around listening to his own music.

Speaking about the early scene, West plays a pornographic video in a meeting with two Adidas executives, to illustrate a supposed similarity between one of the executives’ voices and the actor’s. The apparent power play disrupts the formalities of the meeting. Afterward, a man on West’s team expands upon West’s long-running allegations that Adidas has stolen his ideas.

“What you’re feeling right now is extreme discomfort, and that is exactly the point,” the man says. “Because when someone steals this man’s ideas, his creations, it’s like you’re stealing a child. These are all children of his mind, and you’ve kidnapped them.”