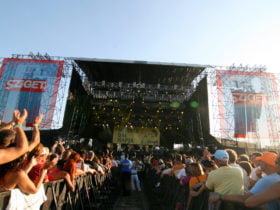 The Avalanches – We Will Always Love You (feat. Blood Orange)

“Sometimes we receive a message. Telling us our music has been there; through dark times, loneliness, loss.” said The Avalanches, “There are no words to express how moving or profound this connection with you is.”

“Because the music was born out of such moments itself, and so it is felt, by those with open hearts, on the same wavelength it was first created.” More added “Morse Code beamed and received by hearts and hearts alike.”

“Our new record is about such journeys, from darkness to light. About life after (all kinds of) death. About the transcendent nature of music itself.”

“Every voice ever played on the radio over the last 100 years now exists in the stars; the transmissions of these singers are forever floating around out there, lost in the cosmos, endlessly travelling.”

“Tonight Smokey Robinson duets with Dev Hynes and The Roches. Those spirits are out there. We are each a tune, floating in space And this one’s for you.”

Must Read :- What Happen When, A Random Person Surprisingly Asked Subway Women To Sing Impromptu Verse…

The Avalanches are an Australian electronic music group formed in Melbourne in 1997. They are known for their two studio albums Since I Left You and Wildflower, as well as their live and recorded DJ sets.