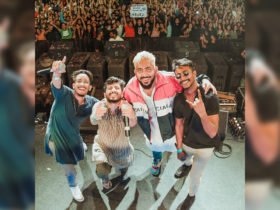 The track, ‘Don’t Be Shy’ marks the Colombian singer’s first song released in the English language. The music video is directed by Christian Breslauer, executive producer by Lluuggaaaa, Christie Director & produced by Miketheproducer.

Karol G said about the track, “Working with Tiesto has been one of the most beautiful surprises that have happened to me this year. I feel like I manifested it. My playlist includes various songs of his and I listen to them often.

“When I was approached with the idea to work together and on top of that to sing a song in English my excitement was on another level. First, for the opportunity to be able to work with Tiesto and second because it would be my first time singing a song completely in English.

She added, “I’ve always wanted to be known for my music in Spanish, but I also feel like right now it’s the perfect time to experiment, expanding and conquering a different audience.”

Tiësto also explains, “Karol G is such a talented superstar and the perfect addition to this song – When I first heard her smooth vocals on “Don’t Be Shy” I was instantly hooked. I am thrilled to share this collab with both of our fans around the entire world”

In the meantime, He will also be performing a set of summer performances entitled ‘Don’t Be Shy Las Vegas’ to celebrate the track.