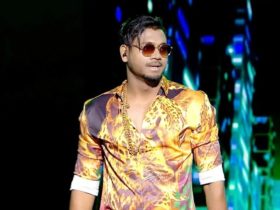 The pioneering Hip hop group, Whodini’s vocalist & co-founder, John “Ecstasy” Fletcher has died at the age of 56. Check out the post below.

According to Variety.com, The cause of death was unclear at the time of this article’s publication; he was 56. on Wednesday (Dec. 23), Roots drummer Questlove confirmed the news via social media with the caption, “One Love to Ecstasy of the Legendary #Whodini. This man was legendary and a pivotal member of one of the most legendary groups in hip hop. This is a sad man”

In 1982, Vocalist, Fletcher co-founded the group and the formed rap trio member with Jalil Hutchins in Brooklyn, then filling out the line-up with J Grandmaster Dee (aka Drew Carter) in 1986. After that, they released their six albums together, including their self-titled 1983 debut and 1987’s ‘Open Sesame’.

Whodini were released the most popular rap/hit singles including “Friends,” “Freaks Come Out at Night,” “Magic’s Wand” and “The Haunted House of Rock.” Nelson George wrote on Twitter Wednesday, “The trio, along with producer Larry Smith, made the first hip-hop records that black radio embraced.”

DJ Premier wrote on Twitter, “A TREMENDOUS LOSS OF OUR HEROES… NO ONE DID IT LIKE THIS… THE VOICE, THE ZORRO STYLE HAT, THE ICONIC HIP HOP THAT WHODINI BRINGS TO HIP HOP… [R.I.P. Ecstasy] SALUTE JALIL AND GRANDMASTER DEE… LOVE TO THE FLETCHER FAMILY…”

Chunk D also wrote, “1987 I entered the @Defjam tour w PE. I tended to be nervous looking at 15000 fans in front of me every night. There were 2 MCS that directly mentored my calm that summer. 1 was @RealDougEFresh the other was Ecstacy of Whodini. Always there to reassure w advice tips #RestInBeats”

“RIP to Ecstasy from Whodini. One of the most underappreciated voices in hip-hop, Too many hits!,” Q-Tip tweeted.