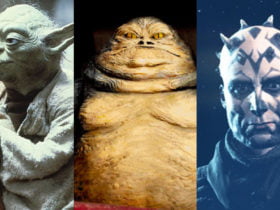 12 Most Unique Star Wars Species You Must Know

Hello folks, In this article, we are going to present to you the best Scooby-Doo movies of all time. In this list, we’ll be peeking at Mystery Incorporated’s top-animated movies, so the gang’s live-action adventures will not be contemplated.

As we all know, Scooby-Doo is an American animated media franchise including many animated TV series produced from 1969 to the present.

An EP soundtrack was released solely to iTunes Stores in the U.S. on September 14, 2010.

Scooby-Doo! Stage Fright is a 2013 cartoon comedy horror movie, and marks the twenty-first series of Scooby-Doo films. Speaking about the movie tale, The Mystery Inc. head to a talent show in Chicago where Fred and Daphne are participating. Upon their arrival, they learn that a ghost named Phantom is threatening everyone.

It is the third direct-to-video film based on Hanna-Barbera’s Scooby-Doo Saturday morning cartoons by Hanna-Barbera Cartoons, Inc. The story tells Scooby and the gang getting stranded in a remote desert town that is full of eccentric people, UFO sightings, and strange goings-on. Upon investigation, they uncover a sinister plan.

Do you know? It was the final film to feature Mary Kay Bergman as the voice of Daphne, as she died in November 1999, and it was dedicated to her. One of the best Scooby-Doo movies of all time.

The movie marks the fifth in a sequence of direct-to-video films based upon the Scooby-Doo Saturday morning cartoons. Speaking about the movie, In Australia, artists who are about to perform at the Vampire Rock Music Festival get kidnapped. People think that a legendary vampire is behind this. Scooby and his gang are called to investigate.

It is the first Scooby-Doo direct-to-video film to have the flatter, bright animation style of the What’s New, Scooby-Doo? series. This film served as Joseph Barbera’s first solo animated production effort without longtime partner William Hanna

The plot of the movie is Scooby, Shaggy and Scrappy are happy to be hired as gym teachers at a finishing academy for girls. Soon, they realize that the students are no ordinary students, but instead the daughters of ghouls. One of the best Scooby-Doo movies of all time.

The story revolves around Scooby-Doo and the gang who become part of a supernatural mystery in Egypt. The film had a limited theatrical release in the United States on May 13, 2005.

Speaking about the movie tale, when writer, Ben Ravencroft, invites the gang to his hometown, they realize that Ben’s place is haunted by his predecessor. They set out to uncover whether she is a good-hearted healer or a witch.

The Witch’s Ghost features natural magical elements rather than the traditionally fabricated ones the franchise is associated with, giving the film a darker tone.

The movie story resolves, that Scooby and his friends tour Fred’s old summer camp, Little Moose. Chaos and thrill are set in action when they reach only to see the camp empty.

Scooby-Doo! Camp Scare film series marked the fifteenth film based upon the Scooby-Doo Saturday morning cartoon. The film was released seven months after the release of Scooby-Doo! Abracadabra-Doo. One of the best Scooby-Doo movies of all time.

Scooby-Doo and the team are entrapped in a video game! So they follow up with Scooby Snacks and merge with a cyber gang to fight the Phan tom virus. One of the best Scooby-Doo movies of all time.

The movie, Scooby-Doo and the Cyber Chase marked the fourth in a sequence of invigorated films based on Hanna-Barbera’s Scooby-Doo Saturday morning cartoons. Also, the film was the first film to feature Grey DeLisle as the voice of Daphne Blake after the death of Mary Kay Bergman in 1999.

Speaking about the story, Scooby-Doo and his team travel to the distant Moonscar island. But the exalted paradise has a dark mystery, which demonstrates itself in the form of vicious zombie pirates.

The team at Hanna-Barbera consisted of many veteran artists and writers. Rock bands Third Eye Blind and Skycycle contribute to the soundtracks including “Scooby-Doo, Where Are You!,” “The Ghost Is Here,” & “It’s Terror Time Again.” One of the best Scooby-Doo movies of all time.