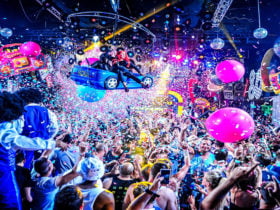 What Is A Rave Party || Rave Culture

Dutch DJ and record producer, Armin Van Buuren has unleashed his all-time state of trance top 1000 lists. Check out the full list below.

Yesterday, Armin Van Buuren announced the list news via Instagram and wrote that “It’s almost time to go down the rabbit hole. Today I revealed the all-time A State of Trance TOP 1000 list, except for the last 50, you’ll find out about those during episode 1000 on January 21st! Are you ready?! The non-stop countdown stream starts right after ASOT episode 999 this Thursday 10 PM CET.”

The Top 1000 list will also take center stage during a seven-day-long A State Of Trance Top 1000 stream that will start counting down to the milestone episode of Armin van Buuren’s weekly radio show when the broadcast of episode 999 ends on January 14 at 10 p.m. (CET).