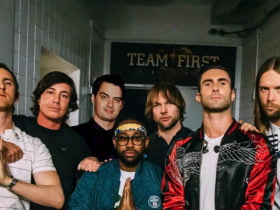 American singers & songwriters, Bruno Mars and Anderson .Paak has released their new album named ‘An Evening With Silk Sonic.’ Listen to the full album below.

It started with the project’s lead single, “Leave the Door Open,” a syrupy-sweet piece of retro-soul that Mars considers something of a backbone for the project.

“Leave the Door Open,” Bruno Mars: “Me and Andy come from the school of performing and playing live instruments. We wrote ‘Leave the Door Open’ and it was just one of those songs like, dang, I can’t believe we a part of this, and we don’t know what it’s gonna do, we don’t care that it’s a ballad or a whatever you wanna call it—to us, this just feels right and it’s important.

“So no matter what, if it hit No. 1 or it didn’t, me and Andy both know that that was the best we could do. And we were cool with that.”

Bruno Mars and Anderson .Paak Album ‘An Evening With Silk Sonic’ Out Now! Like This Album? Stream & Download The Full Album By Clicking Here.