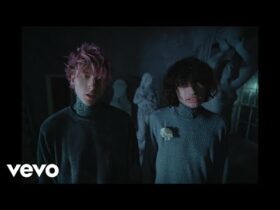 The track is sung by Dilpreet Dhillon and Gurlej Akhtar, Music is given by Desi Crew, Lyrics given by Narinder Batth, Directed By Agam Mann and Azeem Mann, Female Lead Sruishty Mann, Choreographer by John, and released at the label Speed Records.

The song has romance, drama, gangster look, everyone looks like goons crooks. The song has great beats and fresh music by Desi Crew as Dilpreet Dhillon is giving a befitting reply to the society and the gunman in the song.

He shared a cover art on his Instagram and also announced about the track.

Earlier, he released a teaser film of the song for his fans, which made them think that it is a reply to all the outlashes of the Punjabi audience with respect to his divorce controversy.