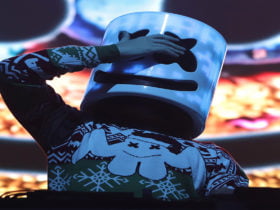 Marshmello Releases First Single, ‘Before U’, From ‘Joytime IV’ 

The Canadian rapper, singer, Drake has collaborated with the Jamaican deejay, Popcaan for the 2 brand new hip hop track named ‘ALL I NEED‘ & ‘TWIST & TURN.’ Listen to the full song below.

Both the tracks appears on the Popcaan’s mixtape ‘FIXTAPE.’ The latter track also featuring an appearance from PARTYNEXTDOOR. The newest release from the artist, Popcaan comes after he dropped his ‘Vanquish’ mixtape in December 2019, his first release for Drake’s OVO Sound imprint.

Download and stream both the track by clicking here.

This year, Drake collaborated with Future for the two tracks, “Desires,” and “Life Is Good.” Recently, he teamed up with DJ Khaled on “POPSTAR” and “GREECE,” and Lil Yachty on “Oprah’s Bank Account.” Meanwhile, he also came on with Headie One for the track ‘Only You Freestyle.’

“Earlier this yr, Drake promised followers that his next album, due in the summer, can be “extra concise”. If getting this mixtape out of the best way means we get a scorcher of a succinct, 12-track record later within the yr, then – all proper – we’ll allow it.

Reviewing Drake’s ‘Dark Lane Demo Tapes’ in May, NME wrote: “Drizzy fails to learn the lessons from his previous album, ‘Scorpion’, on this bloated and unnecessary mixtape, which veers from recycled ideas to outright duds