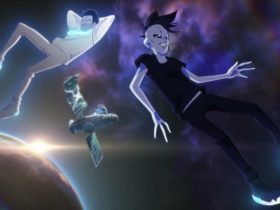 English singer and songwriter, Dua Lipa has delivered her brand new song named ‘Can They Hear Us?.’ Listen to the full song below.

The track is taken from the soundtrack to Gully, the debut feature film from director Nabil Elderkin who had previously worked with Dua Lipa on the video for ‘Don’t Start Now’. The film features Travis Scott and has an accompanying soundtrack featuring music from 21 Savage, ScHoolboy Q, Ty Dolla $ign, Miguel and more.

She also shared the Official Music Video of the track, ‘Love Again.’ Watch below. Meanwhile, Recently, Dua Lipa performed her massive cover of the track, ‘Eugene‘ by Arlo Parks. In Feb, She dropped her single, “We’re Good,” also shared “Future Nostalgia (The Moonlight Edition).” The track is the lead single from the Moonlight Edition of her sophomore album, Future Nostalgia.

Dua Lipa Delivers New Song ‘Can They Hear Us?’