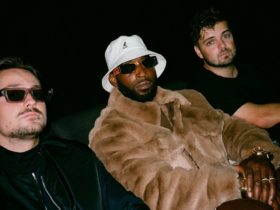 American rapper and record producer, Eminem has revealed his 20th-anniversary deluxe edition of the ‘8 Mile’ soundtrack. Listen to the full soundtrack below.

Eminem shared news of the anniversary release on Twitter this week (October 26) alongside a montage of clips from the hit film. “‘I’m still standing here screaming ‘f*** the Free World,” the rapper tweeted, referencing one of his famous lines from the film. #8Mile 20th Anniversary Deluxe Edition of the soundtrack drops on streaming Friday!”

The deluxe edition of the album contains instrumentals of every song from the original soundtrack as well as a demo of ‘Lose Yourself’. That song became the first rap song to win Best Original Song at the Oscars in 2003 and earned Best Rap Song and Best Male Rap Solo Performance at the 2004 Grammy Awards. The song was also Eminem’s first number-one song on the Billboard Hot 100 chart too.